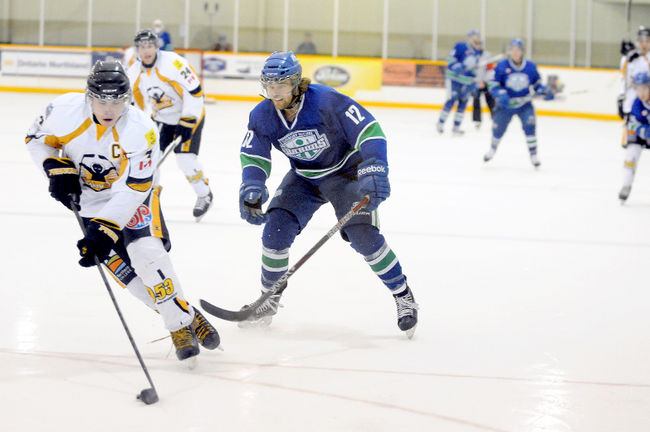 SUDBURY - The Abitibi Eskimos have gone from bad to worse in the span of three days.

After dropping an embarrassing 9-3 decision to the Trappers in North Bay on Monday night, the Eskimos were crushed 12-5 by the Nickel Barons in Sudbury Wednesday night.

Unlike Monday, the Eskimos were never in this game, as they fell behind 3-0 in the first period.

“If we make a mistake, it’s a goal. We have got to get going defensively, that’s for sure.”

The fact that the Eskimos were missing defenceman Steven Pettite (injury) and Jamey Lauzon (suspension) did not help the Eskimos cause, but Gagne was about to use that as an excuse.

“It was the kind of game where I don’t want to pinpoint one player,” he said.

“You can’t do that. It’s a team game and any time there was a mistake, it was a goal.

“Our defence had a hard time. There were too many shots from within five feet, or 10 feet in front of the net.

Marc Dube’s power-play goal just over eight minutes in the second period appeared to briefly give the visitors some life, but Sudbury reeled off five-straight goals to take a commanding 8-1 lead.

Former Eskimos Guillaume Rheault had two of those goals, while Justin Bell, Brody Brunet and Jarecki also scored for the home side.

Kealey Cummings netted a power-play goal for the Eskimos with 15 seconds to play in the period to send the two teams to the locker room with Sudbury in front 8-2.

The Nickel Barons increased their lead to 10-2 on goals by Giovanni Foschia and Jarecki, his third of the game.

The Eskimos struck back quickly, however, with Brenden Locke finding the back of the net 28 seconds after Jarecki’s goal.

Goals by Erik Robichaud and Ryan Wildman made it a 10-5 game with almost half a period remaining, giving Abitibi fans a little hope.

Dylan Callaghan and Martin Jolicouer scored just over three minutes apart, however, as the Nickel Barons made the final 12-5.

Michael Muzyka went the distance in goal for Sudbury, blocking 33 of the 38 shots he faced to earn the victory.

Unlike Monday, Eskimos goalie Sylvain Miron played the entire game, stopping 37 of the 49 shots he faced in taking the loss.

“You know what, it’s not just the goalie, it’s everybody,” Gagne said.

“It was not good. I don’t like it, but we will try to rectify it, we have practice (Thursday).

“If they take a shot and they score every time it is hard on morale … it really is.

“We were playing well, but every time they shot they scored and you can’t have that.

“I am not blaming just my goalie, but he has to stop the puck and right now it’s not happening.

The Eskimos are expecting a 20-year-old goaltender to arrive in camp on Thursday to back up Miron.

“Hopefully that will take a little pressure off our goaltending,” Gagne said.

“He (Miron) is a little under pressure right now and those things happen.

“This is new to him and I am not putting the whole blame on him.

“It’s not our system, it’s not our tactics. We need to stop the puck, bottom line.”

Defenceman Cory Dubbeldam, who was with the Eskimos last season, has returned to the team.

“He is not in game condition, so we are going to evaluate him again tomorrow,” Gagne said.

The Eskimos are looking to trade 20-year-old forward Tommy Labrecque.

The Eskimos will have to regroup before returning to action Saturday night at the Jus Jordan Arena against the Elliot Lake Bobcats.

They will also host the Blind River Beavers on Sunday afternoon.